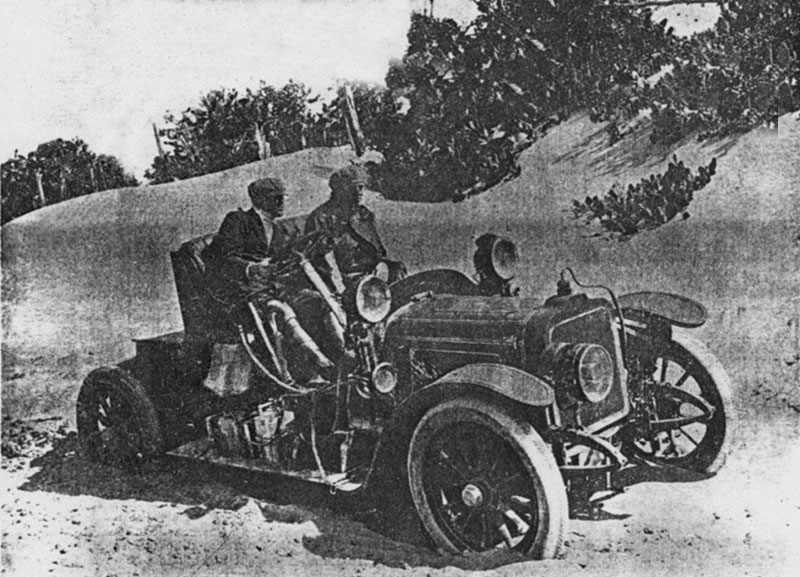 An Inside History mystery has been solved thanks to a knowledgeable and hawk-eyed reader! The identities of our motorcar-driving coverboys on issue 18, our transport edition, remained unknown to us long after the magazine went to print. Luckily, we received an email from Leon Mitchell, an early motor expert from earlymotor.com, revealing the names of these mystery men, as well as the significant, record-breaking role that one of them played in early Australian motoring. A fitting ‘poster boy’ for Australian transport history!

Leon Mitchell told us that: “The marvellous photograph on the cover of the latest issue of Inside History shows South Australian duo G. Gilmore White (left) and Fred Custance (right) aboard White’s 35-h.p. Talbot motorcar c.1910. White was from a wealthy Adelaide family, while young Custance, recently arrived from the UK with his family, was a talented ‘motor expert’ employed by Vivian Lewis Limited, at that time South Australia’s leading motor house. The 35-h.p. Talbot, an expensive and exceptional motor car, was the third Talbot supplied to White by Lewis, and when White caught the bug for motorsports, Custance was offered as his co-driver and travelling mechanic for his long distance record attempts.

During 1909 and 1910, White and Custance captured a number of inter-city motoring records in the car: Melbourne to Adelaide in 20 hours 6 minutes in March 1909, Melbourne to Sydney in 21 hours 19 minutes in December 1909, a record they lowered again, travelling in the opposite direction, in March 1910.

In this period inter-city motoring for business or pleasure was uncommon and ‘road’ conditions were variable. Routes were not clearly marked, and gates, sand drifts, ruts and wandering livestock were hazards not often encountered today. On their Melbourne to Sydney run, for example, White and Custance (and the Talbot) collided with a cow, but went on to break the existing record by more than an hour.

The window for record breaking on public roads was a small one, with restrictions and eventually bans being introduced just after the First World War as speeds rose and local traffic increased. Even in 1910 the 35 h.p. Talbot – a supercar of its day – was capable of speeds in excess of 60 mph (100 km/h) on some hard-packed sections of road.

Fred Custance was only 18 years of age when he set off on his first venture with White in 1909, but his enthusiasm, bravery and technical skill ensured that many more motoring-based adventures were to come. In 1910, while still employed at Vivian Lewis Limited in Adelaide, Custance was engaged (together with another well-known motoring identity Bill Wittber) by F. H. Jones who had imported a Bleriot mono-plane in a partially disassembled state. Over a period of weeks Wittber and Custance assembled the plane and began taxiing tests in a field at Bolivar north of Adelaide. It was during these tests that Wittber made an unintentional ‘flight’ of some thirty metres, arguably Australia’s first controlled flight.

Later, on 17 March 1910, Custance reportedly made two flights, the second ending in a heavy crash landing which extensively damaged the Bleriot and left Custance nursing cuts and bruises. The date of these flights is worthy of note: the following day Harry Houdini made his highly-publicised flight at Diggers Rest in Victoria, witnessed by large crowds and now touted as ‘the first flight in Australia’. Only a week later Custance was on board the Talbot with G. G. White racing the clock from Sydney to Melbourne!

In November 1912, Custance set an Australian record by riding 532 miles in 24 hours on a Lewis motorcycle. The following month, he accompanied Irish-American showman and singer Allan Doone on an ill-fated attempt to break the Adelaide-Melbourne and Melbourne-Sydney records in a non-stop run in Doone’s 80 h.p. National racing car. The problem-plagued attempt ended in a horrific smash at Picton from which Doone and Custance were lucky to escape.

Custance’s aviation experience led him to flying service during World War I, and after his repatriation in 1918 he pioneered the use of tracked vehicles in South Australia’s pastoral regions. Tragically, he met an untimely death, walking alone on an outback road in June 1923 after a vehicle breakdown.”